How Breath of the Wild’s open world stays fun to explore for hundreds of hours.

50 hours later, I’m on my 4th romp through Hyrule (I’m taking the Eventide Challenge if anyone’s curious) and I’m still finding new things untouched from previous playthroughs. I put down my Switch found myself asking, “How did this happen? It’s been more than a year and I still got pulled in!” Putting Breath of the Wild’s world design under the microscope, however, reveals some interesting mechanics that earn Breath of the Wild’s many awards and will likely make it an engaging game for years to come.

The first thing the world does is it supports the main story perfectly, supplying a compelling reason to explore said world. You start out with nothing, your memories lost, and a giant swirly Ganon threatening to destroy the world. Then early into Hyrule, you come across intimidating monsters like Moblins, Guardians, and Stone Taluses. The presence of all of these converge into one gameplay and narrative message: you need to get stronger. The world is a training ground for you to master the mechanics and get Link strong enough to withstand the fight with Calamity Ganon.

But there’s more to it than that. The world is also designed to pull you in by your own curiosity. Where other open world games give you a yellow brick road to follow or an endless checklist of items, Breath of the Wild’s open world suggests interesting objects to you from a distance, and naturally, you make it your goal to get to one of them. On the way you find distractions, getting lost in more things to collect and check out. This dichotomy of goal-distraction is what fleshes out the journey into something that feels organic. 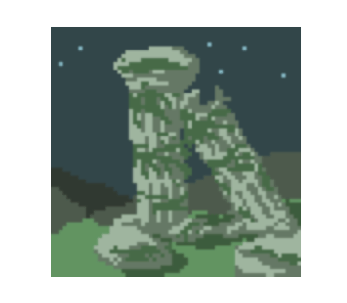 Let’s take the Great Plateau as our first example. From your starting point outside the cave, you have your choice of exploring the forest below you, the cliffs above you, and the path leading to the ruined temple. The cutscene, of course, suggests going to the temple, and let’s say we do that. Goal set. On the way we can pick up mushrooms,  talk to the old man, find tools and weapons, and learn how to fight bokoblins. There’s a chest with some better leg armor if you’re paying attention, too. Then at the temple we can find a chest with a decent starting bow. Then we pick a new destination (likely the one in the story) and the process happens all over again.

While you’re on the Great Plateau, you’re allowed vistas of intriguing places before being granted access to them, allowing you to again form your own goal of where to explore once you obtain that glider. You could follow the old man’s advice and follow the road to Dueling Peaks, or you could run straight to the castle, or you could explore Lake Hylia. Maybe you’ll discover what’s making Satori mountain glow on certain nights, or you might head straight for a tower or a shrine. No matter what path you take, you’ll find smaller things on the way that will make you say, “Wait, let’s check this out first,” including korok seeds, NPCs, monster camps, treasures, other shrines, and dozens of critters and collectibles. I’ve summed it up into the graphic below: 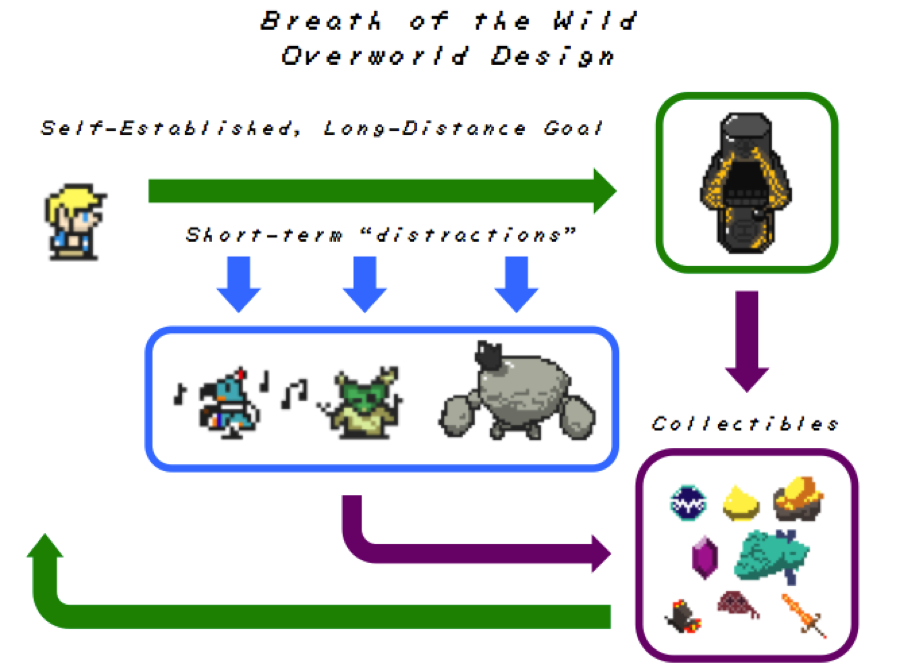 The world repeatedly gives you some good vistas, too, allowing for this cycle to repeat over and over again. All the while you’re uncovering mysteries, mastering the mechanics, acquiring better weapons, getting rich, and increasing your hearts/stamina. And since it all supports you getting strong enough to fight Ganon, your activities never feel like wasted time. The loop is so effective that many players, myself included, played it into the ground and became way too overpowered at the end. The designers tried to counteract this with late game “tougher monsters,” but ultimately the loop worked too well for its own good. Something I hope they can fix in the next game!

What do you think about Breath of the Wild’s world design? What is it about this world makes that pulls you in time and time again, even if it is a year after its release?

If you found this interesting, here are some videos of some smart people that talk about Breath of the Wild’s world design. They even helped inspire my thoughts.

“Breath of the Wild: The Power of Questions,” by Razbuten:

“Why Breath of the Wild’s Empty Space is so Important,” by Writing on Games:

“Breath of the Wild’s Exploration Cycle,” by Design Doc:

3 thoughts on “It’s an Open World After All”