Monster Hunter Generations Ultimate is an adventure / action RPG developed and published by Capcom. It will release to the West on August 28, 2018 on the Nintendo Switch for $60. This is my review of the demo.

Among friends, YouTubers, and most of Japan, Monster Hunter World was a big deal earlier this year. And many of them are also hyped for Generations Ultimate coming out on the Switch. I tried out the Monster Hunter demos for 3DS back in the day, but never got into them. I figured, though, that now’s as good a time as ever to try again, right?

Being greeted by a character creation screen is a nice start. I love customization, and it was cool to test out different weapons and hunting styles.

The worlds for each hunt are nice to look at, but they’re surprisingly small. I think Capcom’s aim was to make connected arenas to fight the monster in, and not so much a big world to explore. Which is fine, it’s just disappointing for someone like me who loves to explore. I’m also not a fan of the loading screens. I get that the 3DS games would need them, but I don’t understand them on the Switch.

And now for the main event: the monster fights. Honestly… I don’t enjoy them. Let’s start with the positives: I like the creature designs. These are some cool beasts to take down. And when it works, it feels good to dodge and counterattack. There is, initially at least, a nice pace to the fight with some well-built tension. 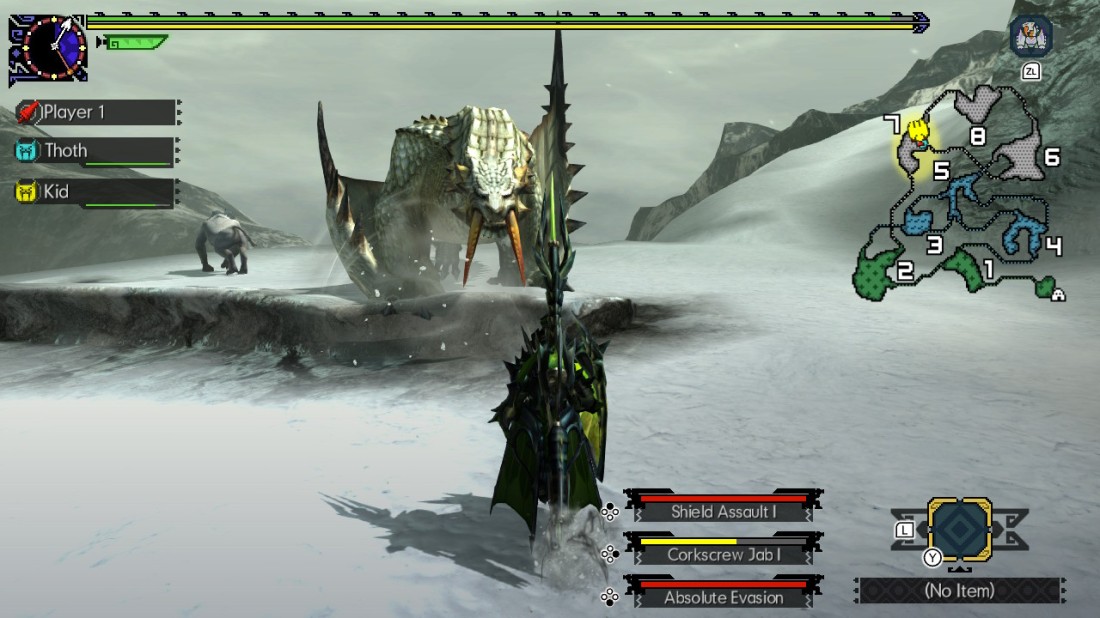 However, the game ruins that pacing with some flawed design choices. Take the dodging and counterattacks, for example. It’s fun, when you can actually read the attacks and land the hits. Maybe it’s just because I’m still learning, but it was difficult to intuit where my attacks would land and where the monster would swipe. I’m sure I looked like an uncoordinated toddler trying to play with a large dog, getting bowled over when it so much as wags its tail.

Second, I feel like no matter what weapon I choose, my fighter moves as if he has concrete cylinders for legs. I’m serious. I realize that some of these fighters have bulky suits of armor with large weapons, but even the lightly-equipped hunters shuffle their feet like they’re wearing the Iron Boots from Ocarina of Time. It makes crossing the map a chore, and it makes the fight drag on.

Speaking of dragging on, the monsters like to run away to different parts of the map, which means sitting through at least 3 to 4 loading screens. If you’re like me, though, and accidentally fight the monster near an exit, you’ll inadvertently leave the area and have to go back and load again. So for me it was more like 13 loading screens. I think they were trying to evoke the feeling of hunting down and pursuing the monster, but in reality it makes the fight so tedious. You follow big red arrows and wait for the fight to load. You hit him a few times, he runs away, and you start all over again. Weeee.

There’s also the mechanic of taking parts from your successful hunts, crafting items, and upgrading your character, and all of that sounds fun. However, I find the rest of the game too troublesome to bother with it. Why upgrade for a bigger fight if it’s going to be just as obnoxious? I’m glad that others are excited, but as for me, I’m skipping this game.

Perhaps I would like it if I’m hunting with friends? Or maybe I would like Monster Hunter World better? I’ve heard it’s much different than the mainline series, and with the PC port out now, it would be a good time to give it a go.