In a few days, the Switch will be 18 months old. And over that lifespan I’ve heard people make many statements about the eShop like: “There are too many indie games,” and “It’s filling up with shovelware.” This analysis is going to look into the validity of these statements. I want to thank Switch Stop’s video “How to Fix the Eshop” and Arlo’s video “The Switch eShop is Healthy (But Might Not Be for Long)” for giving me the idea of making this post. I’ll include links to their videos below in my sources.

It’s time for the Switch’s eShop to have a health checkup. I want to make this post as objective and analytical as possible, using as much “hard data” as I can before offering my own interpretation of the eShop’s state.

My sources include Nintendo’s North American eShop, media outlet Nintendo Everything, and Metacritic. Metacritic is not perfect, but it does give a general idea of a game’s quality. I will be excluding apps, DLC, re-releases, and special editions of games (for example, I’ll exclude the Special Editions and DLC for Breath of the Wild and just use the vanilla game). I will include a link to the spreadsheet I used for this analysis as well. For those who live outside of North America, I hope this analysis can be helpful to you as well. I can’t vouch for Japan, but I assume that if you live in the Western World, your eShop will be comparable to mine.

Let’s go over the Switch’s eShop lifespan and take a look at trends and developments. Starting with total games, the Switch may have started off with a mere 28 games, but now there are 987 on the eShop. Average releases per week have skyrocketed to 21.5 games released per week.

Now let’s look at the games by publisher. Nintendo has made some stellar games to fill the library. 22 Nintendo games are now on the system. The Switch has also gained some Major 3rd party support, but it’s not necessarily an impressive lineup when compared to the Xbox One and PlayStation 4. Mid-Tier 3rd party companies have found a good home on the system. By and large, though, the biggest supporters for the console are the indie games. Indie games make up almost 80% of all the games on the eShop.

Looking at quality, the Switch has maintained a growing library of well-made games. However, the most noteworthy trend is the increasing amount of TBD games, or games with just no review score. These include mostly indie games and games that some may call “shovelware.” The TBD category has increased from just 4% at launch to 38% now.

Based on these trajectories, the Switch will have 1,500 games on its eShop by its 2nd birthday, with an average of 25 to 30 games releasing per week.

The Way I See It

Looking at this data, it’s apparent that the dye has been cast on what the Switch’s life is going to look like. While Switch is getting good 3rd party support, it will likely never get complete support. Even those publishes who are big supporters like Bethesda and Ubisoft won’t bring over everything. And Panic Button can only do so much. It’s sad, but it’s the reality of the situation.

What’s interesting to me, though, is that it seems these AAA companies are making their own internal teams that work with Nintendo. This makes me think the Switch will get more unique AAA experiences like Octopath Traveler and Starlink’s Star Fox campaign, things not found on other consoles.

The Switch, instead of becoming the all-encompassing hybrid machine we initially hoped for, has carved out a niche in the market. It has made itself a console mainly for: 1) Nintendo games, obviously, 2) local multiplayer, 3) RPGs, and 4) indie games. This is classic Nintendo business: try not to compete directly with Sony and Microsoft. Personally, I don’t have a problem with this strategy. You could argue that this niche will help the Switch survive the arrival of the next gen consoles. If Switch will get its own unique AAA games, it won’t need the big releases with 4k graphics. Let Microsoft and Sony battle for that territory.

That seems to be Nintendo’s goal. The question then is, does the eShop actually fulfill Nintendo’s vision the best it can? The answer is… no.

While Nintendo wants the Switch to be an indie machine, that idea is a double-edged sword. On one hand, it allows Nintendo to beef up their library with tons of quality games to hold fans over until the next big release. No matter what you’re a fan of, there’s an indie game for that. On the other hand, the eShop is not prepared for the sheer size of indie games releasing right now. And while I’m not worried about AAA games, I am concerned about Mid-Tier 3rd party and good indie games getting buried by the bad ones. The eShop doesn’t have the right structure to help consumers find the games they want. As the Switch gets older, I believe we are going to see less heart-warming stories like Blossom Tales and more cynical ones like Cosmic Star Heroine.

Now that we have found the problem, let’s find a way to fix it!

Let me start by saying that Nintendo has already done an excellent job curating their eShop… just not on the eShop itself. Their YouTube channel their News channels are great for showing off quality games, but not even outlets can keep up with all the games coming out on their system. Furthermore, not everyone follows Nintendo on YouTube or looks at the News pages. The one thing Nintendo can 100% be certain the consumer will see is the eShop.

Let’s start with the eShop’s default page. When loading up the eShop, you are greeted with an abysmal grid called “New Releases”. It’s overwhelming to see a sea of games every time you load the eShop. I agree with Switch Stop that this is the first thing that has to go. 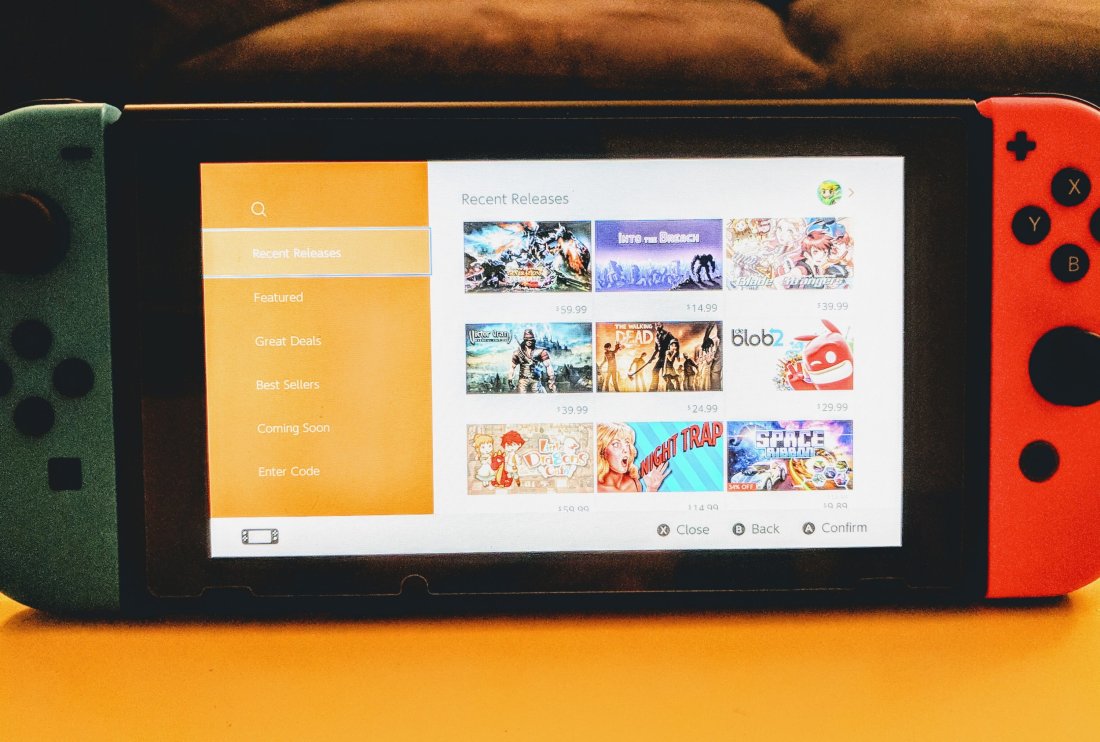 What they should do instead is make the Featured page the home page, clean it up to display less games, and add a star rating system, just as Switch Stop suggests (oddly enough, the browser eShop already has “Featured” as the default view, though there’s no star rating system). From there, the ratings can be used in tandem with other options. The eShop could have a “Browse by Category” page, where you can go through different game genres with the highest ranked games on top and the lowest ranked games on bottom. That way if a person has an itch for, say, a strategy game, they know exactly where to go to find a good new one. In fact, Nintendo already has categories assigned to each game on their eShop. All they have to do is actually utilize that function in a way that helps shoppers.

Finally, Nintendo should implement a “Recommended for You” function on the eShop, similar to what’s on Steam, where it takes user data and makes recommendations based on category. If you think this would be too much work for Nintendo to do, they already have this feature on the browser eShop. They’ve done 90% of the work already, they just need to put it on the system itself.

And there you have it! In conclusion, the Switch is still a great system, and it’s still my favorite console of all time. However, it’s plain to see that the eShop is getting sick. All it really needs, though, is a few changes and some new features, and it would be so much better. I know I’m writing this on an obscure little blog, but I can’t help but fantasize that somehow, someday, it will reach Nintendo’s ears.

What are your thoughts on the eShop? If you were in charge, how would you fix the problem?