Guys, there’s a perfectly reasonable explanation for this.

In 2019 I became interested in Sony consoles for the first time in decades. I’ve recently become much more engaged in the JRPG community, and they are constantly talking about the PS3, PS4, PSP, and Vita titles. Furthermore, I’ve caught the nostalgia bug for the original PS1, and after downloading Final Fantasy VII on my Switch, I’ve started looking for other PlayStation games I couldn’t have as a kid.

It helps that the Vita itself carries this mysterious aura — it’s Sony’s first and only “failure,” and yet its cult following is quite robust. Why was it so loved and simultaneously so ignored?

And then during the holidays I found one at GameStop for $100. I just so happened to have enough gift money for it and two physical games…

For me, it’s the perfect little Sony console:

The Vita is remarkably comfortable. I love my Switch, but after playing it for a couple of years, I have some minor complaints: it’s a bit on the heavy side, the grip is a little too thin, and the left direction buttons feel a bit awkward to use. The Vita, on the other hand, is lighter, thicker, and the buttons fit perfectly where my thumbs go. After several weeks playing on the console, it still feels good on the hands. 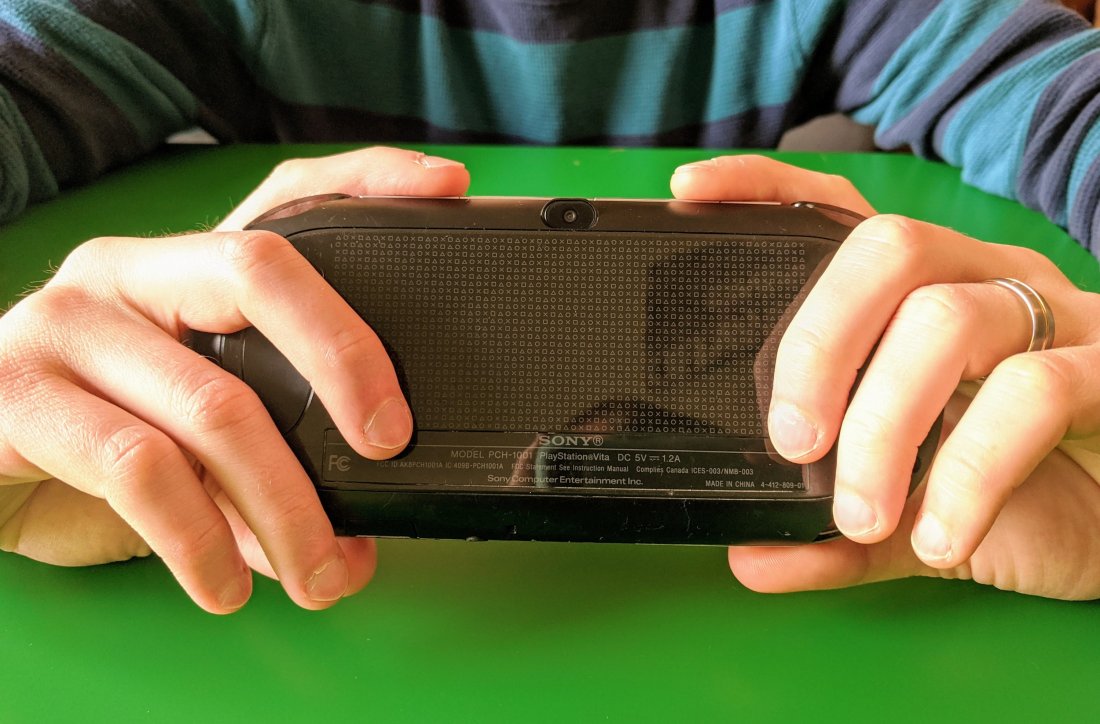 The Vita also sports some strange additions. For example, there’s not only a front touch screen, but also a back touch pad, which becomes relegated to gimmicks in two to three games. It feels good and practical to use, like an extra button for your fingers, but it just never caught on with developers.

The OLED display is the Aphrodite of console screens. It’s hard to capture the quality in a photo or screenshot, but the screen glows with bright colors. On games with inspired art direction, the Vita is leagues ahead of the 3DS’s visuals and sometimes it can even rival the Switch. Depending on the intensity, I can get about 5 hours of battery life with PS1 games (which don’t look as aged on the smaller screen), and more around 4 hours with the graphically-intensive Vita games.

My biggest complaint about the system is Sony’s proprietary memory cards. They are still expensive, even today. Just an 8 GB card cost about $20 and is almost full with my classic games and demos. A beefy 32GB one will probably set you back $60. I’m not kidding.

Unfortunately, the Vita’s promise of console-quality games on the go was a bit ahead of its time. When developers manage to make it work, it’s marvelous. I can have the full 90-hour epic of Persona 4 Golden, or the open-world playground of Gravity Rush, in my pocket. They even made a complete Uncharted game for the system. For every well-optimized game, however, there’s another where that devs struggle with the Vita’s limitations. Countless reviews complain about glaring frame rate issues or large graphical compromises on many 1st and 3rd party games, more issues than people have with Switch ports.

When the Vita released in 2012, I don’t think portable technology was quite powerful enough for the concept. Or maybe the market back then was too enamored with smart phones. Whatever the reason, after its first year Sony pulled most of the 1st-Party support and focused on the PS4 instead. Miraculously, indie devs and Japanese studios have kept the Vita alive for a full console life-cycle. I’ve never met a more devoted fan base than the Vita’s. Only in 2017, when the Switch delivered the Vita’s full proof of concept, did support for the handheld start to die down. I’m amazed that the graphically inferior 3DS performed better, had a more robust library, and had a longer life cycle than the sleek but neglected Vita.

I’m very happy with this purchase, and I’m proud to be one of the few who owns a Playstation Vita. This console will live alongside my 3DS and Switch on my travels and commutes, and I see myself playing the device for years to come.

Welcome to the family, Vita.