The Republic of Gamers Zephyrus G14 is a gaming laptop developed by Asus. It retails for $1400.

So it’s been about 8 years since I bought my last computer, back when I was starting college. I did not prioritize gaming back then, and was more interested in pursuing my art projects. So I got a MacBook. I love my MacBook – it can make lovely music and edit basic movies.

It’s not good at playing games, though.

There’s a reason why I mostly stuck to indie games and Nintendo games. Hyper Light Drifter and A Short Hike really ran the poor computer to its limits. It could emulate rather well, though. Anything from the NES to the DS ran without any problems. I tried running the Dolphin emulator and immediately regretted it. About 95% of everything on Steam wouldn’t run on my laptop.

So as my MacBook was nearing the end of its life, I decided I wouldn’t want to worry about those kinds of limitations anymore. I wanted a machine to supplement my handheld library, some 3rd-Party AAA games that the Switch might not get. All Xbox games go to Windows, and many PlayStation games are starting to get PC ports as well. At the beginning of this year I sat down with a good friend and we made a list of all the parts we would need to put such a computer together.

And then I bought a pre-built laptop instead.

I know, I’m a traitor to the PC Master Race. But the more I thought about it, the more I realized that even during COVID-19 when I’m more at home than I’ve ever been, I still hate sitting at a desk to play games. I already sit at a desk at work — why would I want to do more of that at home? I realized that playing portably will just always be a priority to me. So I bought this guy about 2 months ago and saved myself the hassle of building a machine I wouldn’t use.

The laptop is surprisingly small and light for a gaming laptop. The ones that I’ve tried before in stores felt like I was carrying an Easter Island statue. It’s actually somewhat lighter and smaller than my MacBook. I also appreciate that it doesn’t look like a typical “gamer” computer with the weird LED lights and stuff. Its only “decoration” is just a diagonal grid of dots. I like the dots.

The keyboard is satisfyingly clicky. The spacebar has this extra thick part on the left that makes it easier to use WASD and the space bar at the same time. The battery usually lasted about 4+ hours when gaming, and it fully charged in just a little over an hour. There is, oddly enough, no webcam on the top. Normally this wouldn’t be a big deal, but in this age of only hanging out via voice chat, it’s a glaring omission. But it’s not like I don’t have several other devices that already have webcams. 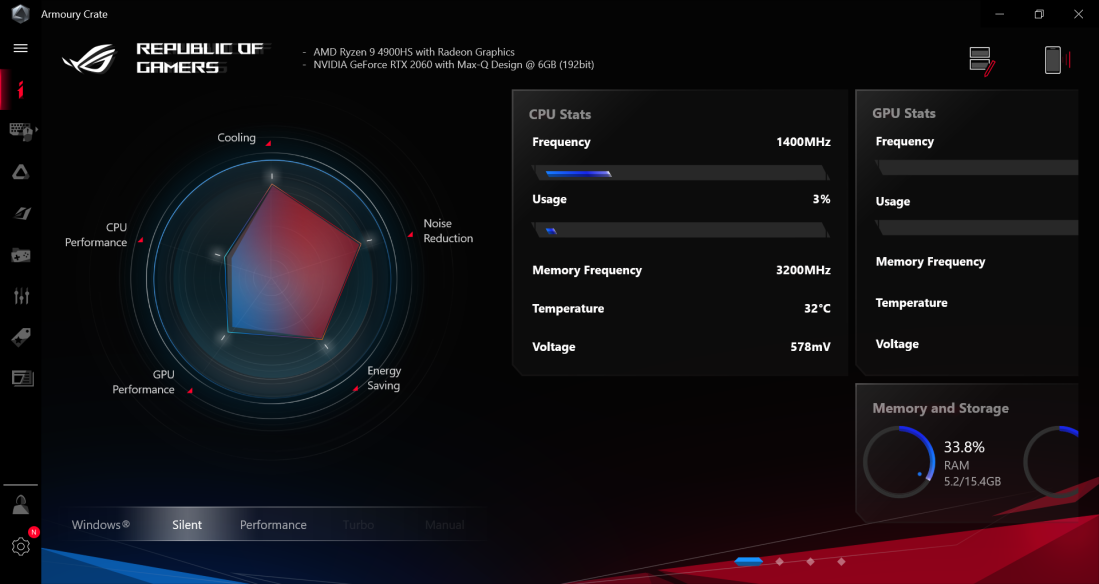 The Zephyrus G14 comes equipped with software which documents the computer’s performance and even shows ways in which you can modify it. Things like Frames Per Second, Battery Life, CPU usage, that sort of thing. I’m not a numbers person, so for a plebeian like myself, I find this a helpful tool to teach me how gaming computers work.

This should come as a surprise to no one, but the Zephyrus G14 runs my indie games perfectly. Ori and the Blind Forest looks absolutely stunning on this thing. Despite how well it was performing, the computer’s fan is rather quiet and the temperature went up minimally.

I downloaded a demo of Forza Horizon 4, and it also ran without a single hitch at a high resolution. Well, does feeling Uncanny Valley from the character models count as a hitch? The details that this machine can render is beyond impressive. On a technical sense, then, Forza Horizon 4 is a cool demo. The actual gameplay, however, is not all that exciting. Driving a car is as much of a power fantasy to me as using a computer at a desk.

Since it’s free-to-play, I also sampled Apex Legends for the first time on this thing, and it also ran perfectly. The last time I played a 1st Person Shooter was Halo 3 back in 2007, and it was a bit jarring to hear the guns sound so… realistic. I put the game down after a half-hour because it was too much for me. Regardless, I found it to be a good benchmark for when I want to get other AAA games down the road.

Another free-to-play game I tried was Destiny 2. It’s developed by Bungie, the guys who made Halo, and I’ve been told that it’s essentially an RPG that plays like a First-Person Shooter. On paper, it sounds like the kind of game that would actually get me to like the FPS genre. Alas, I once again found myself turned off. First off, the game is over 90 Gigabytes. 90! It took me a whole day to download the whole thing. Being a Nintendo / Indie fan, the biggest filesize I’d ever seen is 10 GB. Do people really buy several games this big?? But let’s get to the actual game. Forgive me if you like Destiny 2, but my first impression was that it was the most generic SciFi shooter I’d ever seen. It’s like Bungie took a survey of all the game mechanics Western people like and mashed it together into one flavorless mass. Once again the gun sounds grated against my ears, and those high-definition “realistic” people looked more like creepy dolls. Maybe I’ll give it another try and someday it’ll click, but for now Destiny 2 is a flat “no thanks.” I also downloaded the demo of Final Fantasy XV, and I’m not sure why, but it made my laptop run rather hot. Maybe it’s the open world? The demo might not be optimized for the PC, either. The visuals look… alright. I think many realistic-looking games from the mid 2010s already look rather dated. Everyone looks like they’ve used a hair-straightener for too long — it’s all frizzled and pointed. The fantasy Americana aesthetic is endearing, and I love the story concept of taking a road trip with your bros, but the world doesn’t actually make much sense. Supposedly scary monsters come out at night and terrorize the roads, and yet restaurants and gas stations just hang out by the road without any guards or walls. Guess there’s not very much danger after all? The combat’s a little weird, but overall it’s fun. I’m just used to open-world RPGs that take a bit more thought into their worlds. This game moved from “I definitely want it” to “maybe I’ll get it someday.”

Let’s move on to emulators. The Dolphin Emulator performed like, well… a graceful dolphin! When I’m on battery power I saw a few hiccups came with fast-paced games like Super Smash Bros. Melee and Kirby Air Ride, but when I’m plugged in they’ve hit rock-solid framerates. I’m able to upscale these games to 1080p (or even 4k for some) with Anti-Aliasing. In other words, I can make the games look insanely better than their original versions, and I’ll finally have a way to get quality screenshots of games I’ve wanted to talk about for a while. I’m currently working on a retrospective of the 3D Mario games, and seeing as Nintendo didn’t want to bother giving us an official way to play Super Mario Galaxy 2 on the Switch, I see no reason why I shouldn’t revisit it in my own way.

The PCSX2 (PS2 Emulator) and PPSSPP (PSP Emulator) also run buttery smooth. As with the Dolphin, I can also upscale these games to look way better than when they originally released. I’ll finally be able to crack into lost gems such as Tetsuya Takahashi’s Xenosaga in a self-made “remaster.” I’m going to get Citra up soon as well so that I can acquire the kinds of screenshots for 3DS games that I’ve been wanting for a while (and in that case, I’ll be using dumps of the carts I own). 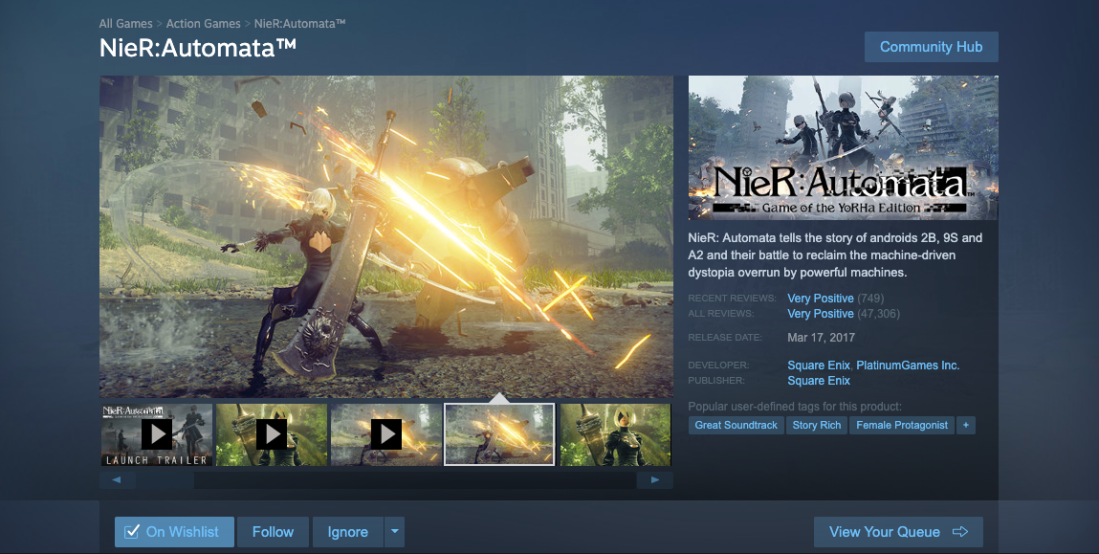 I’m so happy with this machine. While I’m unimpressed by several AAA PC games, I look forward to playing other games on my Wishlist like Nier Automata, Death Stranding, and Horizon: Zero Dawn. And its prepared for handling the upcoming console generation, so that I can use this little beast for the next 8 years.

3 thoughts on “My Next-Gen Console is a PC”