Golden Sun is a JRPG developed by Camelot and published by Nintendo. It released on the Game Boy Advance in 2001. While I played it back when it released, I’ve played it again in 2019.

Back in the early 2000s, EarthBound was an obscure, quirky JRPG with an inexplicable fighter, Ness, in the Smash Bros roster. Thanks to his continual exposure in Smash Bros, and a dedicated online fan base, EarthBound is now *the* SNES game to have, a prestigious item for collectors and fans alike. For the most part, EarthBound earns all of its praises — its endearing setting, humorous writing, and unique monsters all make it a memorable game. It’s mostly held back by some dated battle mechanics and a limited inventory system. Considering all of its flaws, however, EarthBound got so many things right that it definitely deserved its grassroots movement.

Allow me to take up the missionary cause and advocate for Golden Sun in the same way.

Now, Golden Sun wasn’t quite a flop when it released like EarthBound was. It garnered a sequel (technically a Part 2 in the story) and then a third game on the DS in 2010. It’s been 9 years since then, and we’ve heard nothing but radio silence. The third one likely didn’t sell as well as Nintendo had hoped, meaning we’re looking at yet another Nintendo RPG series that probably won’t live on.

Except in our hearts!

So why bother with this old GBA game? First, Golden Sun is a master class in how to properly begin a JRPG. Many start out with the sleepy village, the plot inching along for hours until the game actually begins. The supposed purpose of this is to introduce the player to the world and its the lore, creating an emotional investment so that when the world becomes threatened, you feel inspired to take the journey. 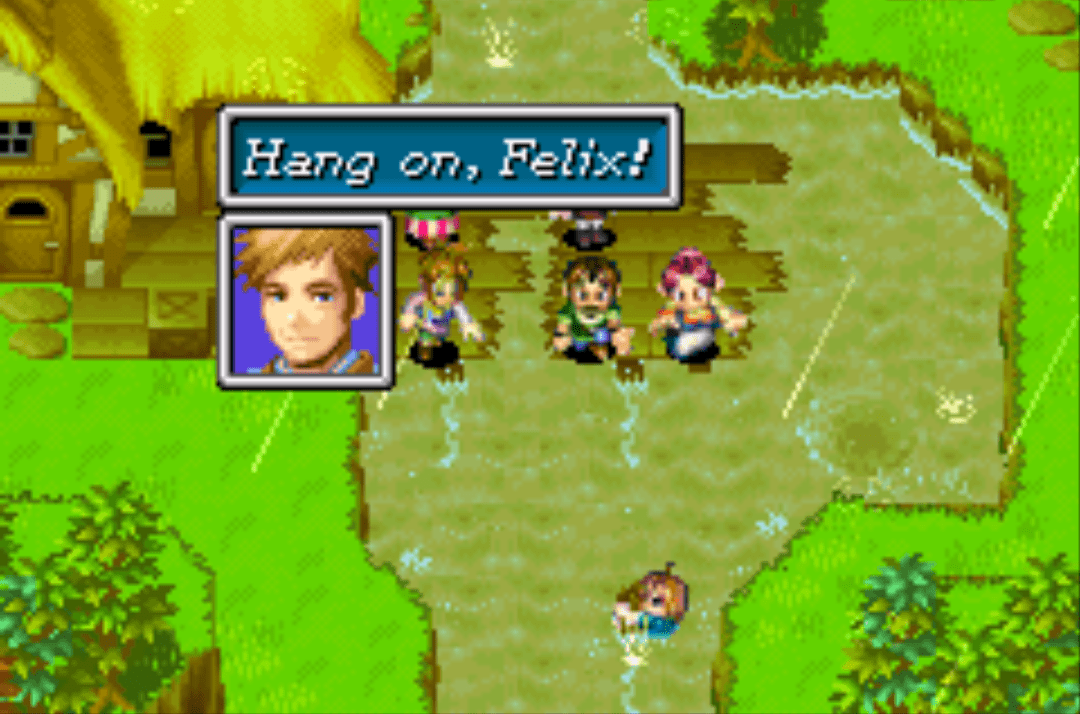 Golden Sun accomplishes all of that within 30 minutes. Your mother shakes you (canon name Isaac) awake as the town is evacuating — a massive boulder is about to run down the mountain and crush the village. As you make your way down, you see one of your friends, Felix, hanging for dear life in a flooding river. You and another friend Garet search for an Adept (one of the few people who can use magic) to help fish him out. You encounter a mysterious duo responsible for the disaster, but they easily overwhelm you and escape. During this tense half hour, you learn about combat, the world’s magic system (Psynergy), and the destructive power it can have when left unchecked. It’s a powerful example of “show, don’t tell” storytelling. Unfortunately, Golden Sun doesn’t always stick to this as the story progresses.

After the opening scene the game, Golden Sun’s story follows a more traditional JRPG structure. Isaac and Garet accidentally allow the sages from before, Saturos and Menardi, to set off a chain of events where Psynergy could be restored to the world at large. It’s up to Isaac, Garet, and a couple of other young Adepts to catch up to them and stop it from happening.

The story is well paced; it knows when to hold your hand and when to leave you on your own. However, the writing of the dialogue is a mixed bag, with long-winded exposition dumps or pointless arguing in many conversations. The core of the story never falls flat, though, as Saturos and Menardi cause havoc in their wake and get you to anticipate your next encounter with them. 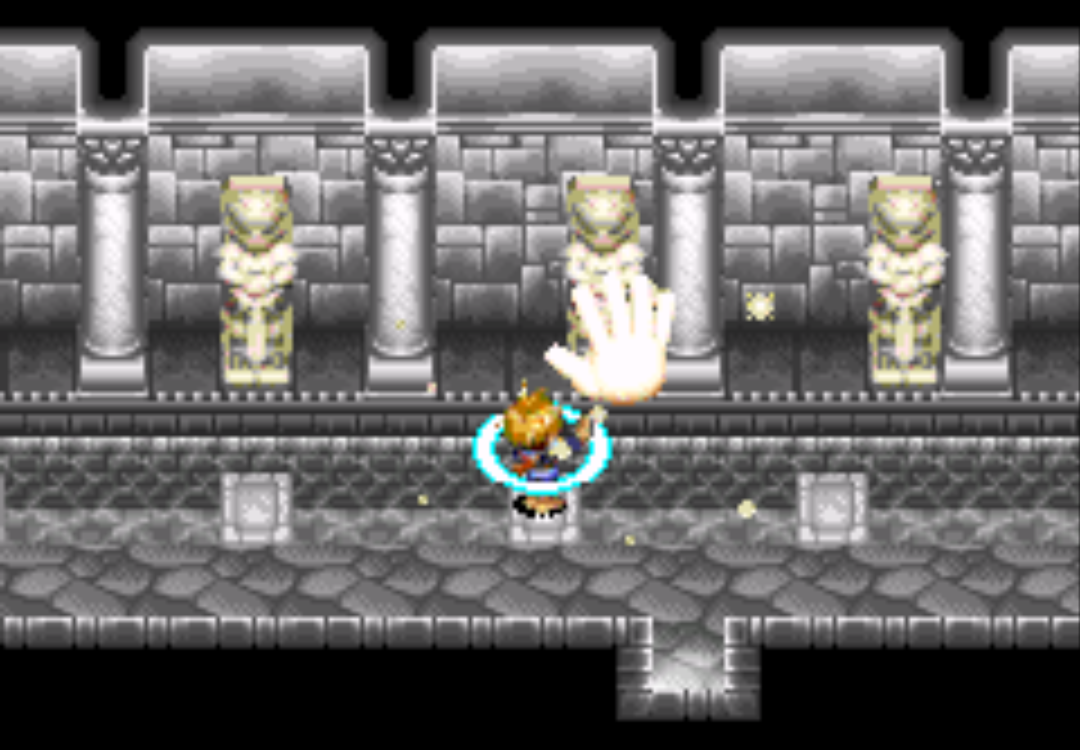 The combat is a simple turn-based JRPG affair, but it has a few twists that make it one of the best of its kind. The first twist is the Psynergy itself. Not only do you use Psynergy in fights, but certain spells also have overworld uses. In fact, the game features several dungeons where you use newly-acquired Psynergy to solve puzzles, making Golden Sun almost like a Zelda game. From levitating blocks across gaps to becoming invisible to sneak past guards, these Psynergy puzzles never fail to make you feel smart once you crack them.

The second twist are the Djinni. There are four types of them, one for each Psynergy element — Earth, Water, Wind, and Fire. These little guys can be found throughout the world, sometimes after a tough battle, other times after solving a puzzle. It’s worth your while to find them, as when you set them to a character they receive a significant stat boost. Once you equip them, the Djinni will actually enhance or alter your spells. In fact, some Psynergy needed for puzzles are locked behind these Djinni combinations, making it worth your while to experiment. 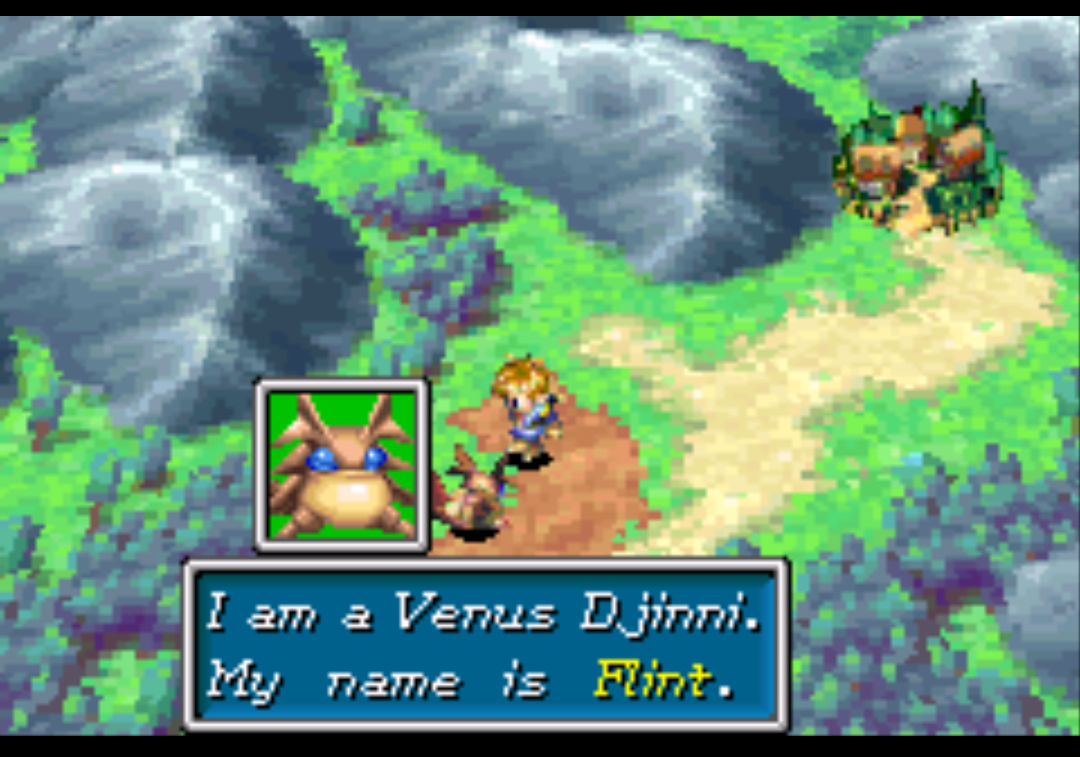 In combat the Djinni can be used for special attacks, and if enough are used of a certain type, they can combine for an incredibly powerful summon. However, it’s risky to do so as your characters will be left without their stat boosts for a few turns. The balancing act of Psynergy, Djinni, and Summons elevate the otherwise vanilla combat system into one of my favorite in the genre.

Presentation-wise, the visuals have aged relatively well. The bright and clean art direction is responsible for this, expertly showcasing the GBA’s power. The animation during combat has a weight and snappiness to it that makes attacks in other JRPGs look flimsy by comparison. And the soundtrack features catchy battle and overworld themes that linger in your head.

At the end of the game, Isaac, Garet, and their new companions Ivan and Mia arrive at the Venus lighthouse (dedicated to the Earth element), where they finally face off against Saturos and Menardi. Unfortunately, the game ends on a cliffhanger. Camelot had originally intended Golden Sun to be a game for the Nintendo 64 Disk Drive, but when that accessory failed, they moved development to the GBA. Due to the cart’s limitations, they decided to separate the game into two parts. Don’t worry, there’s still a satisfying boss fight and payoff, but the story is only halfway finished.

Without my nostalgia goggles, I can see the game’s flaws. But even so, Golden Sun is criminally under-appreciated, and it holds up considerably well, even by 2019 standards. I highly recommend it to anyone who likes JRPGs, or even to anyone familiar with Zelda games. At the very least, I hope you understand why I can’t shut up about it and why I still lobby for Isaac to be in Smash (even though I don’t expect it to happen). In my youth Pokemon introduced me to JRPG mechanics, but Golden Sun made me a JRPG fan.

Next week, we’ll walk through one of the gutsiest things I’ve ever seen a JRPG attempt, in Golden Sun: The Lost Age.